The Knights are excited to announce the new Junior Varsity Head Coach!

Coach Cox was born in Portsmouth, Virginia but relocated to his true hometown of Anderson, Indiana before his 1st birthday. After graduating from Anderson Highland High School, Brent attended Ball State University, receiving his Bachelor of Science degree in accounting. Brent is the founding partner of Cox, Beckman, Goss & Company, a Certified Public Accounting and Business Consulting firm that will celebrate it’s 20th year of business in January 2021. Brent and his wife Andrea have 4 children, including 2 sons who both play hockey. Brent was introduced to hockey late in life after his oldest son began playing. Teaching himself to skate at 40-years old, he created a love and passion for the game that saw him work to attain his Level 5 hockey certification. Brent’s most recent coaching position was as the assistant coach to the Junior Fuel Hockey Club 14U AA hockey team. Prior to that, he was the head coach of the Junior Fuel Hockey 14U Select Team for two seasons from 2016-2018. Brent has coached players from mites to 14U. He has coached on several travel teams, while also serving as the head coach for 10U, 12U and 14U house teams. Having not played hockey as a child, Brent was groomed to coach at the onset of the USA Hockey ADM program. Stressing the key fundamentals of the game and skill development, Brent’s strengths have been to work with players to help them pursue their individual goals while mentoring them to become better and stronger teammates. Most importantly he works to prepare them for their next level of hockey while fostering the players love of the game.

The Central Indiana Knights are happy to announce that for the 2020/21 hockey season they will join forces with the Westfield Hockey Club and the Zionsville Hockey Club to form a Junior Varsity team that will compete in the newly formed Indiana Sate Junior Varsity League. This league will have teams from all over the state including the greater Indianapolis area. The JV team will compete in home and away games with the other JV teams in the league, along with playing an end of season tournament. The teams’ schedule will be rounded out by competing against like-skilled teams from Indiana and surrounding states. This will give our Junior Varsity players an opportunity to compete in a 30-35 game schedule for the upcoming season, prior to competing for a position on their respective Varsity teams the following year.

Please welcome the following players from the Central Indiana Knights program to the Junior Varsity Team.

These players have a bright future with the Knights and we look forward to a year of development under Head Coach Brent Cox during the upcoming season.

I am pleased to welcome the following players to the Varsity roster for the Central Indiana Knights for the 2020/21 hockey season.

While we understand that the hard work is still to come please congratulate these players on their accomplishment. There are a number of players who had very solid tryouts that did not make the Varsity roster, however we have added them to our JV team. An announcement on those players and more details about the JV team will be coming in the next few weeks. Each of those players has been notified of their team status and we look forward to each of them being Knights for the entirety of their High School Hockey career.

Thanks to everyone for their efforts to make tryouts successful!

Follow the  link below to register for the upcoming Knights tryouts. You must register before tryouts, the link expires June 18th at 5pm.

Cost to tryout is $100, which will be credited toward your season tuition upon accepting your offer.

Good luck all! See you at the rink!!

The Knights would like to announce the 2020/21 Tryout Schedule.

All sessions are at the Fuel Tank at Fishers.

Tryout information link will be sent next Wednesday 6-10-20

The Knights are excited to announce the new Varsity Head Coach!

Coach Pozzebon was born and raised in Canada. He received his Bachelor of Science degree at Queens University where he began his coaching career 27 years ago. During the 21 years that Rob has lived in the United States he has coached at various levels of youth hockey.

Rob was a Head Coach and Assistant Coach at AA and AAA travel hockey as well as High School Hockey. He was previously a head coach with HSE Hockey and the Cathedral/ Chatard Hockey Club where his team won a state championship. Rob spent the last three seasons as the Tri State Spartans 18U AAA Assistant Coach. Rob holds a Level 5 USA Hockey certification, and has always had a focus on player development, helping each player achieve their highest potential while striving to exceed team goals.

Rob takes over the helm from Mike Farrier who has decided to pursue other coaching opportunities.  The Knights family thanks Mike for the years spent coaching and playing in our organization. We wish him the Best!

There will be a board meeting Feb 3rd for the CIK Knights.

Spring League for the Central Indiana Knight Hockey Club is just around the corner.  Attached is a copy of the six week schedule.  Please take a moment to review the date and times to see what works best for your schedule.

There are only 20 player positions available for each week not including goalies.  This will be on a first come first serve basis so as soon as you know your availability please let me know.  If you show up and your name is not on the list you will be turned away if we have 20 players.

The fee is $10 per game per player.  If you sign up for all six weeks then the fee is only $50 for all six games.  Please make sure payment is made before your player steps out on the ice.

Your player will need to bring a light and dark jersey for each game.

Please email David Cuffel at dgcuffel@sbcglobal.net and/or Tara Einterz at tara.einterzlaw@gmail.com to register for Spring League or if you have any questions.

Knights put LC on power play they score. Knights down 5-1

Confusion in the corner. Player and official collide. LC benefits and score. Knights down 4-1

Start of the Third

End of one. Knights down 2-1. Will start off second period short handed

Challand Wright and Dyar get the Knights started. Tied. 1-1 https://t.co/1R2maeqy9x 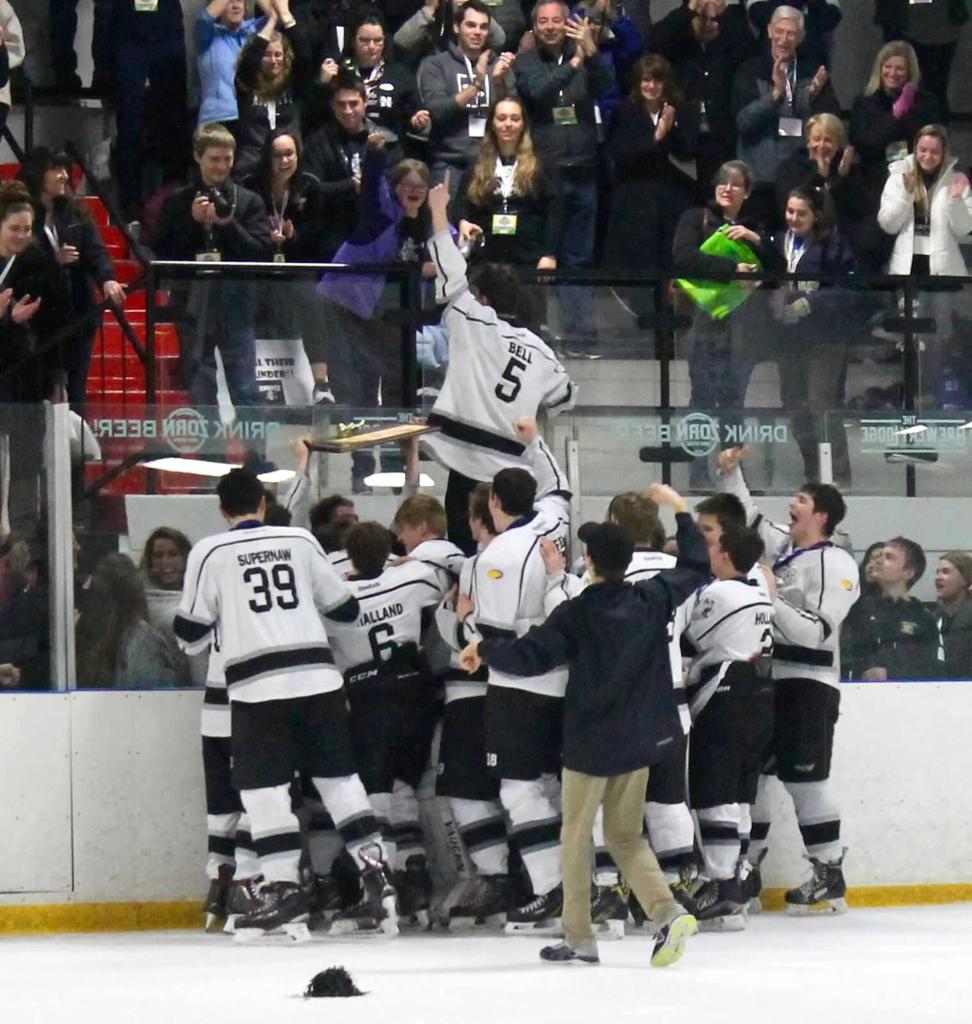 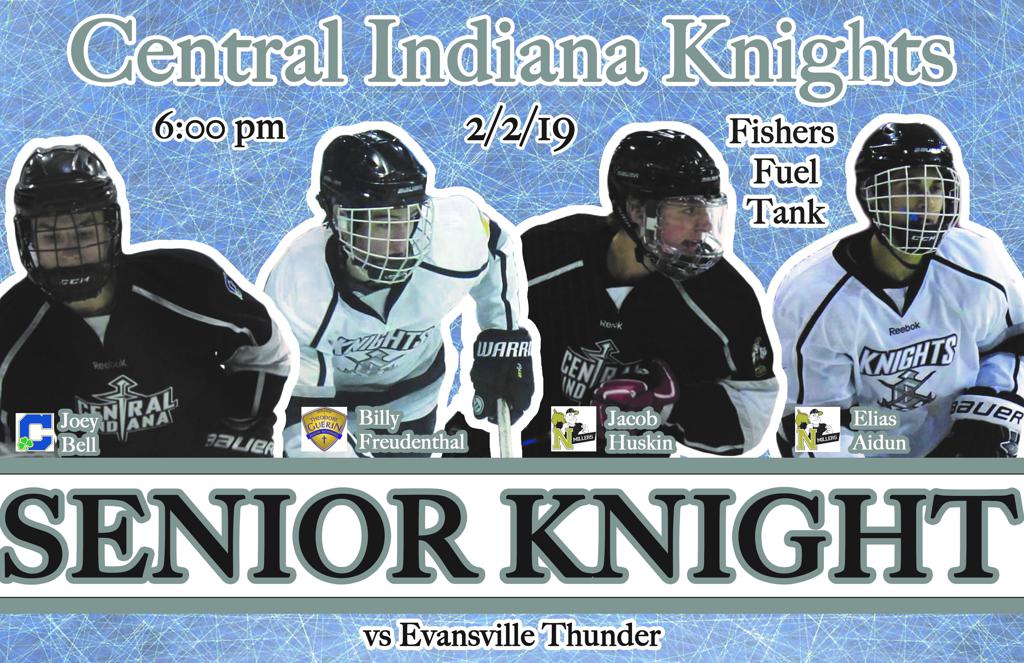